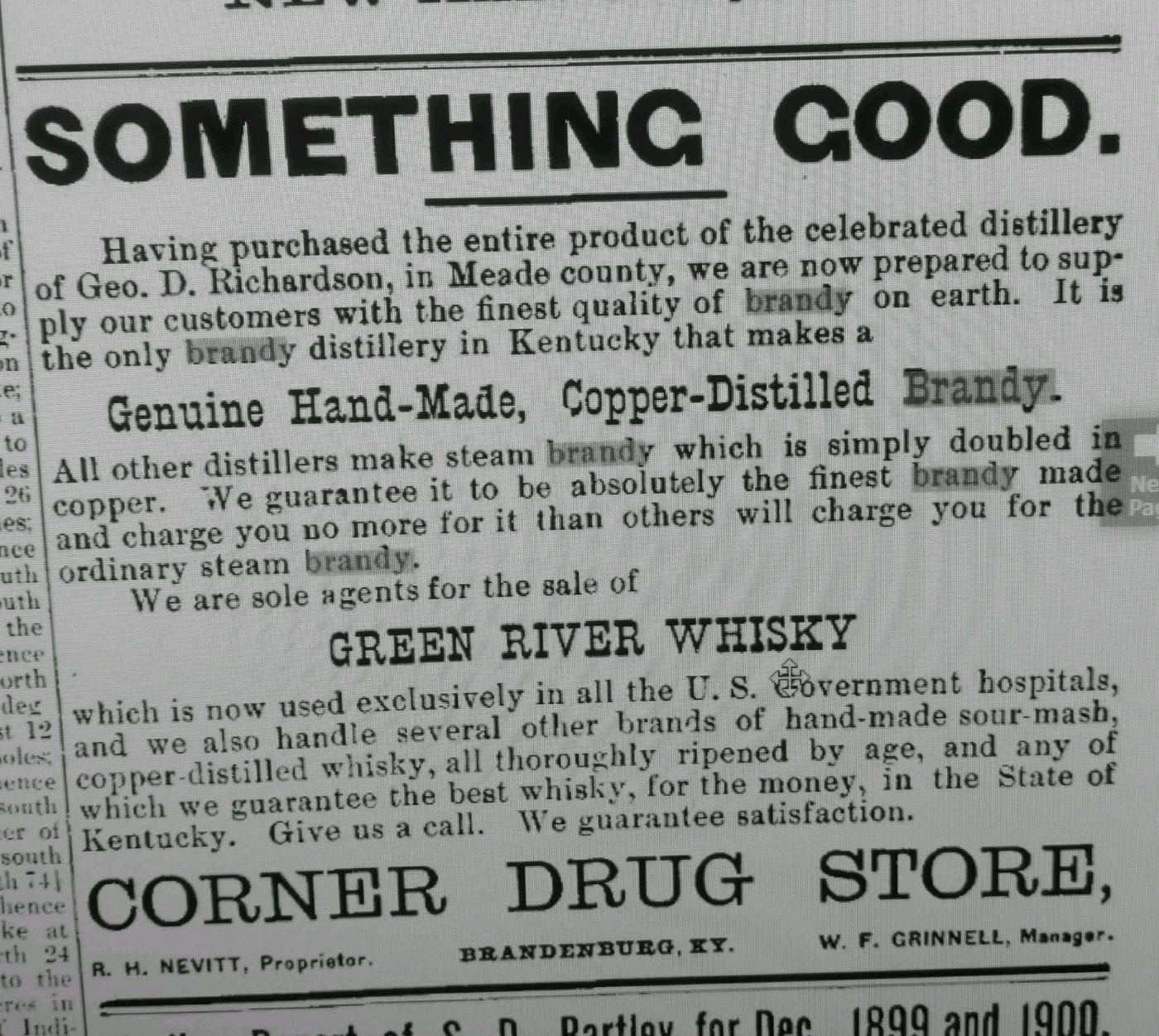 Again I am back to researching the George B. McCoy and Co Distillery of Stampers Creek in Orange County Indiana. Why? Mostly because I continue to find more and more information about this farm distillery that operated until 1916 and because it is one of the few where there are newspaper articles, descendents of the distillers, and even photos to research.

Recently I was perusing old newspaper articles when I came across this add for the R.H. Nevitt Corner drug store in Brandenburg KY which boasts of apple brandy purchased from the George D. Richardson Distillery that is “Genuine, Hand Made, Copper Distilled Brandy” as opposed to other products that are only doubled in copper.

The article got me thinking about several details regarding the McCoy Distillery I have read over the years. In particular this line from the History of Lawrence, Orange, and Washington Counties where the McCoy is referenced as a “Steam Distillery”:

The McCoy’s were turning out quite a few 30 gallon brandy barrels yearly made from the old Apple Mash method which leaves tons of solids (which easily burn in a pot still if not filtered out) in the wine which enters the still. It would certainly make sense for them to find a quick and efficient way to run this wine into brandy with the use of steam as opposed to open flame which risks scorching the product. As well, I suspect the McCoys were distilling some whiskey as well:

This article was written in 1901 and describes a grain distillery on Stampers Creek, at that time only two distilleries were operating in the area; the McCoy and the Wolfe. I’ve seen references to whisky associated with the McCoy’s but never the Wolfe’s so I am inclined to believe that the McCoys were distilling whiskey.

What does that have to do with steam distilling? While it’s never explicitly stated that this distillery on Stampers Creek was distilling wash (filtered beer or wine with no solids) or mash (unfiltered with solids) it does compare their distillation to that which is happening in the state of Kentucky where the tradition of running the mash, grain and all, into the still was more common. I also infer from the tone of the reporting that this distillery was considered a bit more “industrial” in effect than the typical farm distillery. Those facts coupled with the old add we ran before about the 20 horse apple grinder the McCoy’s purchased (obviously looking for industrial efficiency) lead me to believe we are talking about the same distillery. Running mash and all into a pot still can be done with good luck on an old onion style pot still if its kept well conditioned or lined with straw but is generally pretty risky. All of this of course is happening at a time when distilling is undergoing some industrial changes, from the romantic pot still of yore towards the efficient column still of modernity, and also at a time when rye whiskey is at the precipice of popularity and relying on a contraption often referred to as a “steam still” but known also as a three chamber still!

So my brain was piqued when I saw that the George D Richardson distillery (who also shipped some product into Indiana being located across the river from Mauckport and New Amsterdam) were advertising essentially double pot distilled brandy. Suddenly it made sense, in order for the 5 distilleries in Harrison County and the 2 in Orange County to have produced in total the 2-3000 barrels they did many years in the short amount of time (3-6 months) yearly, they would have had to have turned to industrial efficiency, the aptly named “steam still” certainly fit the bill.

The three chamber is almost a take on the old European Pistorious style still, designed as a batch system, but more efficient than a pot still, it allows for steam to be raised by an engine, pumped into the bottom chamber, flow to the wooden or copper plate that seperates the bottom chamber from the middle chamber, enter a manifold of piping, circulate through the middle chamber, rise up a copper pipe through another plate and enter yet another manifold in the third chamber. Mash, with solids and all enter the top chamber (with no worries of burning or scorching as they never come into contact with a surface in touch with direct flame)where they begin the distilling process under low pressure and after a heads cut is made the mash can be dropped into the second chamber via a valve for further distilling (rectification or the raising of the proof and purity of the hearts/tails) as new mash enters the top chamber the middle is dropped to the bottom for further rectification, the top moves to the middle, and fresh mash enters the system again. From here the steam would travel on to a doubler or thumper system for further distilling to raise the proof and purity of the final product. The illustration above shows a column style doubler but I imagine some of these doublers were more like the pot still shaped doublers that you see in modern beer column Bourbon distilleries, hence the advertisements touting that other apple brandies are only “Copper Doubled”.

This style of distillation would have put the mash in contact with multiple heating processes and subsequently would have extracted heaps of flavor from the wine/beer and imbued the new make spirit with a unique product not capable of being produced in the old pot still methodology.

My suspicion is that the producer and seller of the old copper method brandy knew that most of the brandy distillers outfitted with steam distillers were probably running the wooden style (though there were copper 3 chamber stills too, Leopold brothers in recent years had Vendome Copper and Brassworks of Louisville Kentucky build one for them to recreate the old Maryland style of Rye Whiskey)and were trying to infer that the old double copper pot distilled method of 100 years prior is what set them apart.

Two pieces of evidence lead me to believe that this is exactly the style of still the McCoy’s were running at the turn of the century. The first is the advertisement of the distillery auction:

As you can see they offer a 3 horse steam engine (enough to run a fair size 3 chamber) connected to a “stationary boiler” which they never refer to as copper. They also mention “200 lbs” of copper pipe, far more copper than needed for the serpentine worm and probably includes the piping from the steam engine to the boiler, perhaps the piping in the boiler, and the subsequent piping from the boiler to the doubler and worm.

Though unrelated the mention of the 80 Hogsheads (68-120 gallon barrels) give us some indication of the size of the distillery as these were used for mashing in apple brandy or whiskey for distillation.

The second piece of evidence is the most convincing in my opinion. Though we don’t know of any pictures from inside the still works we do have a picture of the distillery after the tornado that ripped it’s roof off in 1912 (4 years before the auction), in this photo I’ve always noticed three things. a. there is a barrel on the second story of the stillhouse in the far left hand corner. b. there is a gentleman standing in the same area that seems to be wearing business clothes (Distiller? Owner?) next to that barrel. c. to the left of the tree in front of the building is a piece of infrastructure that looks to be coopered with bands like a barrel but tapers to the top, it could just be my imagination but to me that looks a whole lot like the top of a three chamber wooden still like the one illustrated above. Take a look and decide for yourself: